A study has confirmed the sustainability credentials of a new bio-based alternative to creosote which is being developed in Bio4Products.

The peer-reviewed scientific publication showed the use of wood modification based on pyrolysis oil  contributes 82% less greenhouse gas emissions compared to fossil-based creosotes. Due to lower toxicity it is also 7.4 times less damaging to human health.

Lead author Jurjen Spekreijse, “Our study shows that pyrolysis-based wood modification is a good alternative for fossil-based creosotes. This is further evidence that in addition to energy production, pyrolysis oil can be applied as biobased chemicals and materials, developing a sustainable platform based on pyrolysis oil.” 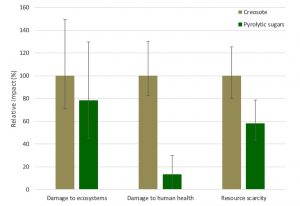 More sustainable wood modification treatments are being sought with some urgency to replace the highly toxic creosote, which is still predominant for certain heavy duty applications such as railway sleepers and fencing.

The bio-based alternative is based on a cooperation between TransFurans Chemicals and Dutch timber company Foreco, who will market the product.

The raw material is provided by BTG Biomass Technology Group, who are developing a technology to divide pyrolysis oil into multiple fractions for use in material applications, including resins and wood modification.

The authors performed a Life Cycle Assessment (LCA) to better understand the sustainability of the new solution. The LCA contained an analysis of 17 different environmental impacts clustered around three end points: damage to human health, damage to ecosystems and damage to resources.

They found that the sustainability of this and other pyrolysis-based applications will depend to a large extent on the type of biomass feedstock used. For example, there was a significantly larger impact on human health and resource scarcity when maize digestate was used over forestry residues.

The impact of the pyrolysis-based modification treatment compared to creosotes was calculated based on the production, use and end of life of 1m3 of treated wooden poles for one year.

You can read the whole article in Applied Sciences.